In Plato’s (c. 400 B.C.) ideal state men would lived on a healthy diet eating wholemeal barley or wheat bread and galettes. Socrates, however, suggested that this meant the whole population would be living on pig-food. The truth is that  in those days, Athenians  featured barley cakes (maza) and barley bread in their diet but they liked their bread white- the favourite bread of the rich too.

To many modern people it may seem surprising that Athenians  enjoyed about 66 kinds of bread and cakes, with more or less interesting names as regards ways of baking, shape of bread, ingredients and origin. A variety of breads were made for some religious festivity and to be offered to some particural divinity as well.

The average Athenian ate about 800 gr bread daily but bread was also figured in the diet of the very wealthy.

Athenians could grow wheat and barley but Athens had not the ability to produce all wheat it needed on its own soil without resorting to trade. The city-state imported wheat from other countries:  Black Sea Region, Sicily and Egypt.

The diet of Athenians was very simple, why, then, 66 kinds of bread and cakes? Fine athenian bakery developed because there were advances in technology,  economic conditions, political conditions, cultural influences, trade, abundance of ingredients at least among the upper classes, public bakeries’ establishment, evolving taste and fashion…

There were bakeries, yes, but of all household tasks the most serious was  breadmaking.

Pestles for pounding the grains, saddle querns and rotary hand querns for grinding the flour need muscle power. In classical Athens home grinding was done by woman’s muscle power… On a daily basis, farmers, poor women and women slaves spent about 5 ½ hours to make flour for a family of 3 adults and 3 children.

Gorgeous sixth-century B.C. black-figure lekythos from Boeotia. It depicts the entire process, from crushing the grains with a mortar to kneading dough and shaping loaves

After all grains had been grinded, the women  pushed the flour through a sieve to remove brans,  kneaded and  baked.

There were ash baked breads  and lovely crusty loaves mixed with cheese and honey.
What did they taste like?

All these were the subject of ” Egkrides,* plakountes,** 8 white and 8 black breads. Manufacture and use of dough in Classical Athens”,  the talk  I gave  at the invitation of Historical Folklore and Archaeological Society of Crete (ILAEK). I spoke in front of an audience that was curious about ancient breads and cakes, in the beautiful environment of Kipos, the open air cinema in the municipal Garden of Hania. 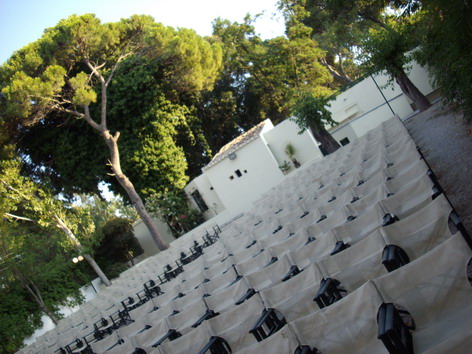 To get a taste of ancient Athenian breads and cakes, I made 4 kinds of bread and 2 kinds  of cake that reflected both ancient Greek ingredients and baking techniques. 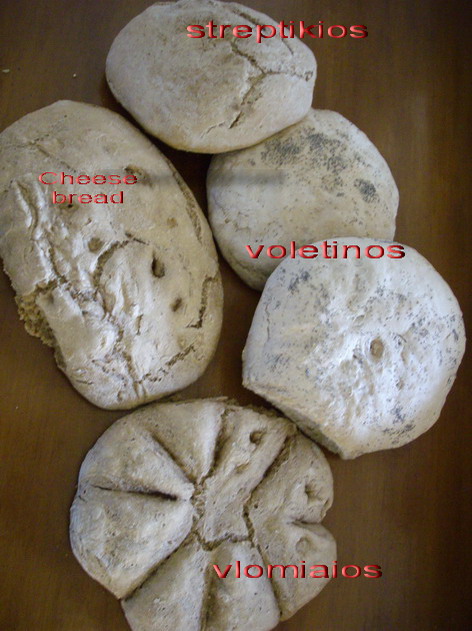 Vlomiaios: rectangular bread. Streptikios artos:  made with pepper, a little milk and a small amount of olive oil. Voletinos: a bread flavored with poppy seeds. I used emmer  flour (triticum dicoccum)  for cheese bread and vlomiaios and triticum compactum for voletinos and streptikios. The honey- cheese plakous and the sesame-honey-milk plakous (no photos included) were made with semidalis (durum wheat flour), the finest wheat flour. I substituted grape must for sourdough in voletinos… it gave excellent baking results.

Yes, after the talk there was bread-tasting and we had fun doing it!

**Plakountes (pl., plakous~ sing.): a large variety of cakes. There was no really difference between plakous and bread…  although, fine flour, cheeese, honey,spices, seeds and herbs were more appreciated in plakountes.   (The latin placenta comes from an. Gr.plakounta)

6 thoughts on “Egkrides, plakountes, 8 white and 8 black breads. Manufacture and use of dough in Classical Athens.”