By the time of the classical period  the early breakfast was called akratisma and, as the name implies, consisted of a piece of bread dipped in unmixed wine (akratos). Sometimes, figs, olives and cheese complemented bread and wine.
The first meal of the day was called ariston and was eaten around noon. Byzantines called it also “lunch”. In one of his poems the 12th century so-called Ptochoprodromos complained that cobbler consumed tripe and Vlachian cheese for breakfast. Βut there is a considerable amount of exaggeration concerning eating in the poetry of Ptochoprodromos.
What did the modern Greeks eat for breakfast?
Until a few decades ago, they ate cheese and bread or rusk with herbal tea or -more expensive- coffee. A cup of coffee and a cookie or a piece of cake was not uncommon for people who lived in the cities. Farmers used to eat papara, herbal tea with rusk, cheese and olives, trahana soup, fruits and cheese. During winter they drank warm wine with pepper and/or cinnamon.
Of course,  they got hungry around 11am… it was time for more cheese and bread or a piece of bread dipped in olive oil, a piece of pie or even a small portion of cooked food.
Nowdays, breakfast is not a meal which is paid a great attention. Often it is eaten on the run and many people rush of to work just drinking a cup of coffee.
Now do you understand why I enjoy the Turkish breakfast so much?
Lots of thanks to my dear friends Stavriani and Angelis; they introduced me to this wonderful breakfast!

Eggs with kavourma (mutton braised in its own fat) 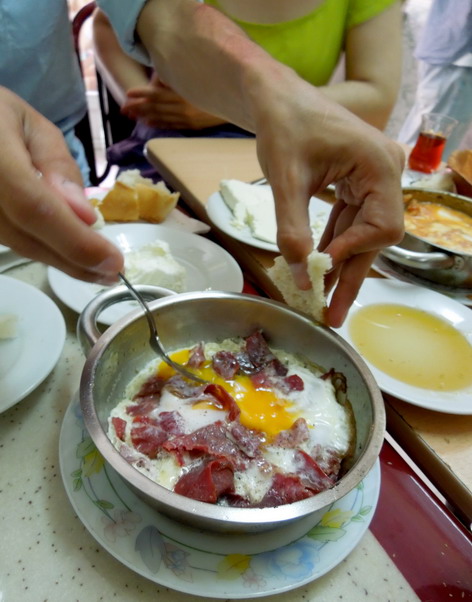 6 thoughts on “Best breakfast I have ever had”