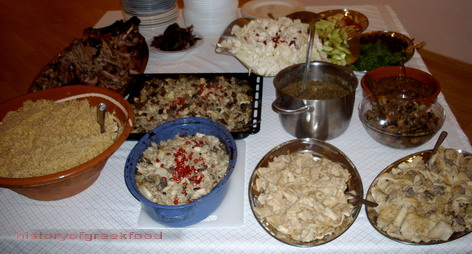 When Macedonian Caranous gave his wedding banquet, early in the third century,  only 20 men attended as his guests. As soon as they had sat down, a silver bowl was given to each of them as a present.

When they had drunk the contents of the  bowls, then there was given to each of the guests a loaf  of bread on a bronze platter of Corinthian workmanship, of the same size; and chickens, ducks, pigeons, and a goose and lots of other items. Each guest took the food and gave it, platter and all,  to the slave who waited behind him. Many other elaborate dishes  were also served. And after them, another platter came, this one was made of silver, on which  was placed a large loaf, and on that geese and hares and kids, bread curiously made, and doves, and turtledoves, and partridges, and a great  abudance of many other kinds of birds.

After  some flute-playing women and musicians had played a prelude, other girls came in, each one carrying  two  bottles of perfume bound with a gold cord and they gave a pair to each of the guests.

Then a great treasure was brought in: a silver platter with a golden edge, and large enough to receive a roast piglet of huge size, lying on its back, showing his belly, stuffed with many delicious things: roasted thrushes, and paunches, and a most countless number of fig-peckers, and the yolks of eggs spread on the top, and oysters, and scallops.  And to every one of the guests were given these items, nice and hot, together with the platters.

But this was not the end of the banquet.

Many more items were brought until the serving time of the after- dinner tables: hot kid, roast  fishes,  Cappadocian bread, real Erymanthian boars  and rivers of wine.

Finally, the after-dinner tables: flat cakes – Samian types and Attic types-  Cretan gastrin, along with the special cake- boxes for each of the guests.

What a feast, indeed!  And what a plethora of ingredients and combinations for those who demanded (and could afford) the best, most extravagant,  most fashionable and ultimately most expensive foods.

after Alexander’s conquest Hellenistic civilization was spread through the E. Mediterranean and Near East.  Long distance trade between West and East expanded; crop varieties were exchanged;  new fruits were introduced and spices were imported from the East;  new foodways were imported  as well.

that wedding dinner  manifestates -among other things-  the dramatic changes of eating during  the end of fourth and the early part of  third century.

As  the Greek cities were dominated or governed by the Macedonias and  the successors of Alexander competed with each other in manifestation of magnificance and power,  those different foods and foodways became widely adopted by the elite. The wealthy had a large and gastronomically elaborate menu  in a style  influenced by  Macedonians, Persians and the polished Magna Grecia  that had reached a high degree of refinement.

such dinners also  contributed to the display of the wealth.  Silver and golden platters, dancers, singers, gifts to the guests  etc. emphasize the manifestation of wealth rather than concern the food itself.

the local cuisines of the Greek cities were considered old fashioned or old or simply poor .

it is worth pointing out that  two centuries later the availability of a great selection of herbs and spices and the wide range of their combinations  imply that Greeks did’t consider them extravagant anymore.  Obviously, they had become familiar with them.

A good example of the abundance and combinations of condiments is myma, a meat dish of the 1st century B.C.  Stirred into the meat and giblets were  13 herbs and spices-cheese was among them- and blood.

All these details show how far the Hellenistic people had developed the art of cooking.

can we recreate Hellenistic recipes?

Hmm…  For the first dinner of the  Edible history poject which took place at Evmaros (Cultural Association) I made goat cheese and hydromeli; I made  breads with ancient wheats   and plakountes; I baked them in a sort of  klivanos and  in the wood fired brick oven of the bakery in my neighborhood;  I pickled radishes with home made vinegar and home made wine and 20 days later I minced and mixed them with minced raisins and mustard seeds (many varieties of vegetables and greens have disappeared; never thought that it was so difficult to find radish with long root); I stuffed a piglet….

the truth is  that  if we cannot cook over an open fire (though we use replicas of ancient utensils) an if  we don’t raise the same animal races  or cultivate the same varieties of  vegetables in the same ways as the ancient Greeks, recreating ancient dishes is very difficult. Since we ignore quantities and cooking times, it’s getting  practically impossible.

We do know that Hellenistic people had a sweet and sour cuisine – probably, less sweet and sour than the Roman cuisine-  which blended the sharp tastes of vinegar, wine, herbs and spices with the sweetness of honey, raisins and grape molasses but we cannot revive it.  We can only give a flavor of the  foods that they may have eaten. 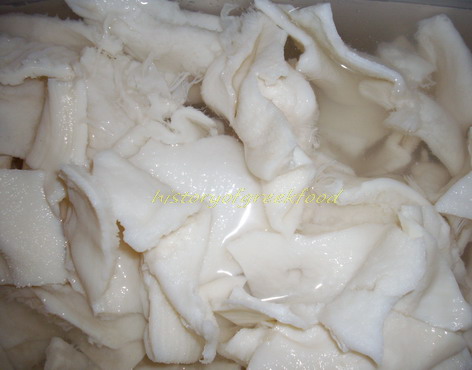 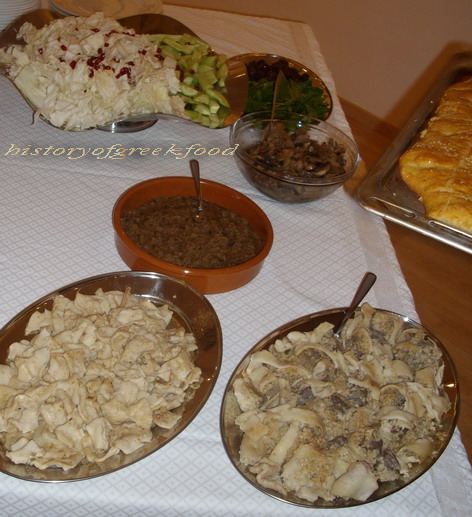 Clockwise from top left:
cabbage, cucumbers, apples, pomegranate seeds;
black olives;
arugula sprinkled with Vietanmese nuoc mam, a good substitute for garos (the ancient fish sauce);
mushrooms with oxymeli ( a boiled  mixture of honey, vinegar and water);
pickled radishes;
pork belly stuffed with liver, bulgur and blood;
boiled tripe  served in sharp vinegar, cumin and asafoetida. Originally it was served sprinkled with the famous silphion (latin: silphium), a plant that marked rich dinners. After its disappearing, it has been replaced by asafoetida which was brought by Alexander the Great to the West. 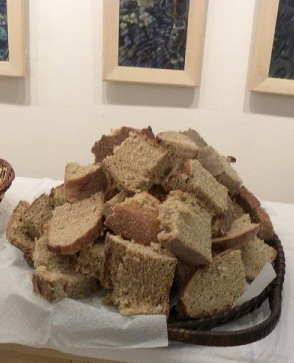 (Photo by Ivy of Kopiaste.org)
Bread made with emmer flour and sprinkled with poppy seeds. The leaven was grape must. The bread was baked in the oven of my neighborhood’s bakery. 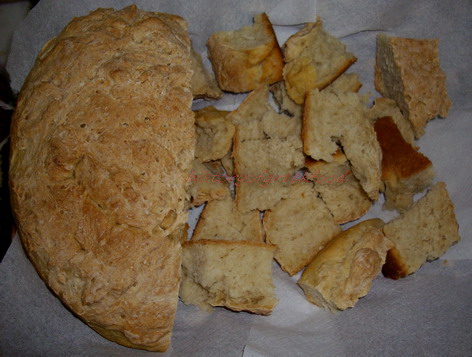 During hellenistic years new kinds of bread became popular; Cappadocios artos- a bread apparently native to Cappadocia- is one of them.  It was also called  “apalos” (soft). It was  made with flour, a little milk, olive oil and sufficient  salt.  I mixed 1 cup of wheat flour with salt and warm milk and set it in a warm place. Five  hours later the mass had become porous. I added a little olive oil and flour and  mix them to form a quite soft dough. Then I poured it into a bread mold and  set it in a warm place.  Cappadocios is a very fine, white bread with slightly sour taste.
Main course

Epainetos says in his Art of Cookery  that “A myma of any sacrificial animal, or chicken, is to be made like this: chop the lean meat finely, chop liver and offal finely, mince with blood and flavor with vinegar, baked cheese, silphium, cumin, fresh and dried thyme, Roman hyssop*, coriander leaf, coriander seed, Welsh onion**, fried onion or poppy seed, raisins or honey and the seeds of sour pomegranate. You may also serve it as a relish.” (1st.cent.BC, apud Athen. 662d)
If you want to make myma you need access to some blood. Talk to your local butcher about it.
Next to myma: bulgur cooked in free- range chicken broth.

In ancient Greece, fresh meat required to be slaughtered and prepared by a mageiros, a butcher, sacrificer and cook) with appropriate religious ritual. Oven roasting became popular during hellenistic years. It was also introduced from the East allowing the development of extravagant stuffed meat dishes, which later became popular in ancient Rome.

Our piglet was stuffed with chicken breasts, roast thrushes,  fig-peckers, paunches and yolks of eggs.

“Defterai trapezai” (second tables) corresponded to our dessert. They were called so because clean tables were brought in. Dessert consisted of different kinds of fresh and dried fruits, nuts, cheese, cakes, sweetmeats etc.

Cheese-plakountes (bread-cakes)  have their ingredients (fine flour, honey***, fresh goat chees, water)  mashed into a pulp or they were made in a form of stuffed bread.

** Welsh onion has nothing to do with Wales. According to Wikipedia ‘Welsh preserves the original meaning of the Old English word “welisc”, or Old German “welsche”, meaning “foreign”. The species originated in Asia, possibly Siberia or China’.
***Best honey was still agreed to be the thyme honey of  mount Hymettus.

****Black pepper was imported from the East and presumably was more expensive than silphium.

HERE, ANOTHER DESCRIPTION OF THE DINNER (ΒΥ ΙVY OF KOPIASTE)