One of the intriguing mysteries of ancient Greece is what is the nature of the nourishing, medicinal, magical and potentially dangerous drink that is known as kykeon. 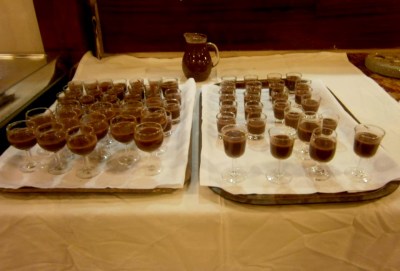 Kykeon made for “A gastronomic journey back in time”
(On Saturday, 6th of October I created a dinner for the Friends of Museum and Archaeological site of Delphi. The menu was inspired by tastes from homeric to modern times)
photo by Stella Drimiskianaki

In the eleventh rhapsody of Iliad the “fair-curled Hecamede prepared a mixture, she whom the old man had brought from Tenedos, when Achilles laid it waste, the daughter of magnanimous Arsinoüs, whom the Greeks selected for him, because he surpassed all in counsel. First she set forward for them a handsome, cyanus-footed, well-polished table; then upon it a brazen tray, and on it an onion, a relish  for the draught, as well as new honey, and beside it the fruit of sacred corn. Likewise a splendid cup near them, which the old man had brought from home, studded with golden nails. Its handles were four, and around each were two golden pigeons feeding, and under it were two bottoms. Another indeed would have removed it with difficulty from the table, being full; but aged Nestor raised it without difficulty. In it the woman, like unto the goddesses, had mixed for them Pramnian wine, and grated over it a goat’s-milk cheese with a brazen rasp, and sprinkled white flour upon it: then bade them drink, as soon as she had prepared the potion.”
Kykeon in this case was used to nourish Nestor’s tired friends  and the wounded Machaon, the son of Asclepius~ the god of healing.  (Iliad 11 ver. 635 – 641).
However, in the tenth book of the Odyssey, Circe the witch makes a kykeon spiced up with dangerous herbs and honey for Odysseus’ companions. The influence of the drink transformed them into swines (Odyssey, 10 ver. 230-240).

At the end of the 7th century a recipe for kykeon without wine  appeared in the Homeric hymn to Demeter, where it provides the myth for the consumption of kykeon at the Eleusinian mysteries.
“She (Demeter) asked instead for barley and water to drink mixed with tender leaves of glechon. Metaneira made the potion and gave it to the goddess as she had asked; and great Deo received the potion as the precedent for the Mystery. (Homeric Hymn to Demeter, line 207 ff; in Wasson et al. 1998, 74) Glechon or blechon is the ancient Greek name for the pennyroyal (Mentha palegium).

A recipe for glechon kykeon is also found in the Diseases of Women II, in the chapter on the red flux:

“If (the flux) is pungent, give a kykeon: let there be a portion of the previous remedy, one of cheese, one of barley meal. Towards the evening, add some honey and give to drink.” The previous remedy was made with moss from the olive tree, oak gall, rue, oregano, glechon, barley meal, ground mixture of pulses and goat’s cheese.
Both recipes includ barley meal and glechon and both have to be taken while fasting
.
Barley groats (alfita), water and glechon were also the elements for the Eleusinian kykeon:
“On the fifth day of the festival (19 Boedromion) the celebrants would proceed in formal procession from Athens back to Eleusis, bearing the sacred hiera as well as a statue of the boy-god Iacchos. The latter deity, who personified the shouts of exultation that the participants would periodically emit, was identified at least as far back as the days of Sophokles with Dionysos (cf. Antigone, vv. 1115 ff.). This identificiation constitutes prima facie evidence of a very significant connection between the Dionysian and Eleusinian Mysteries…..
The initiates would then rest, purify themselves, and maintain either a partial or complete fast. It is believed that they would break their fast as evening approached by drinking a special beverage known as the “kykeon,” consisting of meal and water mixed with fresh pennyroyal mint leaves (the same brew that Demeter drank, as recounted in the Hymn, lines 210-11). Obviously, the grain in the drink was a symbol of Persephone, the eternal goddess who dies, goes under the ground, and then comes back to life again.

Scholars disagree widely over the significance of the kykeon. Some have maintained that it must have had a sacramental character involving a communion with, or assimilation of, the spirit of the deity (Loisy 69; Jevons 365ff.). On the other hand, Mylonas doubts that it had any such “mystic” significance, although he acknowledges that the drinking of the kykeon was an “act of religious remembrance” involving “an observance of an act of the Goddess” (259f.). Even on this muted interpretation, the similarity to the Christian Eucharist is striking.” The Eleusinian Mysteries“

Some scholars have proposed that the power of the Eleusinian Mysteries came from the use of a psychoactive drug in kykeon; because alfita, water and glechon were the elements publicly announced and not part of the secret. In the Road to Eleusis, R. Gordon Wasson, Albert Hoffman, and Carl A. P. Ruck suggested that the ergot species Claviceps purpurea- which contains LSA, a precursor to LSD-  was the probable psychoactive ingredient of the kykeon. Their theory remains controversial although the Mixing the Kykeon, from the pages of ELEUSIS: Journal of Psychoactive Plants and Compounds, New Series 4, 2000, describes in much detail the chemical process of mixing an alkali with ergot alkaloids to produce a much less toxic product: “Hypotheses advanced in The Road to Eleusis  concerning the possible composition and method of preparation of the kykeon are evaluated in light of published criticism. Objections to the Eleusis theory are countered, and based on a largely overlooked aspect of the chemical hydrolysis of ergot alkaloids, a new hypothesis is suggested that reinvigorates the  Eleusis debate. In part 2 of this essay, organic chemist Daniel M. Perrine provides further considerations that build upon the new idea, and a technical discussion of the practicality and realisability of the “Ergine Hypothesis” paves the way for new chemical and psychopharmacological research. In part 3, co-author of The Road to Eleusis Carl A. P. Ruck re-examines the Eleusis mythologies and ritual practises from which appear a much expanded understanding of the entheo-pharmacology of the ancient world”.


Of course
you can always attempt to make a glass of homeric kykeon.

The name itself is a clue; kykeon comes from the verb kykao, which means “stirring”, “churning”.
Another clue comes from Homer, who characterised the mixture as sitos, ‘cereal food’, always it is drunk though. The twelfth century archbishop of Thessaloniki, Eustathius  says that kykeon was something between food and drink; “perhaps, it was a sort of soup that you could sup”  (Eusth. 870. 65 ει και μεταξύ βρωτού και ποτού ο κυκεών είναι δοκεί, αλλά μάλλον οία ζωμός τις ροφητός ην”)
These suggest that the resulting mixture was something  like a thick soup.
Besides, the  late fourth or early fifth century grammarian and lexicographer Hesychius of Alexandria equates ptisane with kykeon. (Hesychius, Lexicon. Kykeon) This is not a surprise since  ptisane was made from hulled and roasted barley groats and kykeon was made from roasted and ground barley.
However, in spite of the fact that Homer suggests that the consistency of kykeon depends upon the continuation of stirring, if you’ll add some roasted and ground barley meal to wine, grate goat’s milk cheese over it and stir constantly you will definitely not have a thick drink.  Moreover, the resulting mixture is not very pleasant to modern palate.

Everytime I make kykeon for a historical dinner I mix a portion of wine with roasted barley meal, grated firm goat cheese and honey and simmer for a few minutes stirring constantly. Then I remove from heat, let cool, add some more wine to thin and stir again. The taste is pleasant and here is a third clue; Homer said that Hecamede used Pramnian wine.  Eparchides (3rd century b.C. apud Athenaios Deipnosophists, 1.30 b-e) says that Pramnian wine was produced in the island of Icaria, on the mount Pramnos. This wine was so dry and of such exceeding strenght that, according to Aristophanes,  Athenians didn’t enjoy it.   Galen describes it as “black and austere wine” (οἶνός τις οὕτως ὀνομαζόμενος μέλας καὶ αὐστηρός) and this quality may have suggested the etymology proposed by  Eustathius and others, from παραμένειν, because of its ability to mature.
Therefore, choose  a dry, austere and crisp red wine. Barley meal,  goat cheese and thyme honey not only act as a stimulant to drinking but also sweeten and balance the taste of wine.

*The title is borrowed from “Mixing the Kykeon“,  ELEUSIS: Journal of Psychoactive Plants and Compounds, New Series 4, 2000.