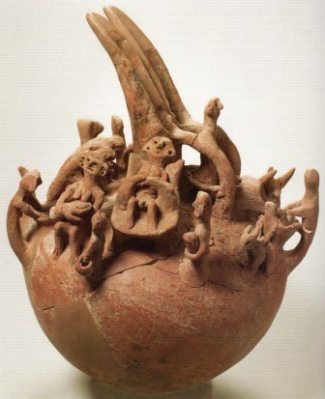 Its decoration shows what daily life was like in  Cyprus over 4000 years ago.
At the rear base of the two spouts there is a woman with her feet in a vessel that opens undeneath to allow some juice to flow into a small basin below.
Dr. Pavlos Flourentzos has identified it as one of the earliest extant visual represantations of grape- stomping and thus wine making.

Feasting and the consuming body in Bronze age Crete and Iron age Cyprus by Yannis Hamilakis and Susan Sherratt.   They discuss the importance of feasts and social rituals involving the consumption of food and drink to establishing and maintaining authority and power.  Wine consumption is discussed to the extent; “it can operate as a barometer for broader  patterns of consumption and of political and social developments, especially as part of feasting events.”

Grape-pressings from northern Greece: the earliest wine in the Aegean? by S.M. Valamoti, M. Mangafa, Ch. Koukouli-Chrysanthaki and D. Malamidou. Houses burnt down at the Neolithic site of Dikili Tash in northern Greece preserved the remains of wild grapes and figs. The charred shapes showed that there was a pile of grape pips with skins – clear evidence for the extraction of juice. The authors argue that the juice was probably used to make wine – towards the end of the fifth millennium BC the earliest so far from the Aegean.