The combination of ground cereal grains and milk or yogurt to produce a highly nutritious, storable foodstuff is a common practice among the countries of the Eastern Mediterranean.

There are two Cretan variations under this category: xinochondros (sour ground wheat) which is the boiled mixture of fermented goat’s or /and sheep’s milk and “chondros” and galochondros (milk-ground wheat)  which consists of fresh unfermented milk and chondros. Both are usually consumed in the dried form.

Chondros is called the coarsely ground wheat on the islands of Crete, Carpathos and Kythera. According to Geoponika,* in ancient Greek chondros was the dehulled  emmer wheat grain (Triticum dicoccum) that had been  pounded, boiled and gradually mixed with white, fine gypsum and a quarter part of the whitest and finest sand for each part of gypsum ( a practice that contributed to the grain husking). When chondros was all husked, they passed it though a rather coarse sieve. The best was the first-sieved chondros; the third sieved chondros had the worst quality.

The pre-procession of cereals is actually an idea  dating back thousands of years.

The archaeobotanical remains of ground einkorn and barley grain from northern Greece and Santorini indicate that preparations created by parboiling cereals and combinations of ingredients such as cereals and milk go back as early as the third millennium B.C. in northern Greece and mid-second millennium B.C in Santorini. Although the archaeobotanical finds of processed cereals cannot tell us much about the techniques and the recipes involved in their preparation, the description of Geoponika is reminiscent of bulgur preparation.

As I’ve already said,  the cereal grain that is know under the name chondros in Crete, Carpathos and Kythera is simply coarsely cracked wheat. For a very long time it was home produced and in the hands of women, men were not completely excluded from the grinding though. Nowadays, the manual grinding process has been replaced by the mechanical one and women buy chondros from the market. Sometimes bulgur is used instead of cracked wheat.

Chondros is mainly produced using Triticum durum, so in the recipe below I used mavrathera, a local variety of Triticum turgidum subsp. Durum.

Keep the raw, unpasteurized milk in a room temperature until it begins to turn sour and thick. Stir once or twice per day.

Put the sour milk into a pot. You can use the whey too. Bring to a boil.

Carefully add the ground wheat (in a ratio 1 wheat: 3 ½-4 milk). This is the time to make the sign of cross or blow three times, thus you will bless the xinohondros or  you’ll awake the apotropaic gods. 🙂

Simmer stiring  constantly. When it thickens and spoon stays in the centre of the xinohondros, remove from fire. 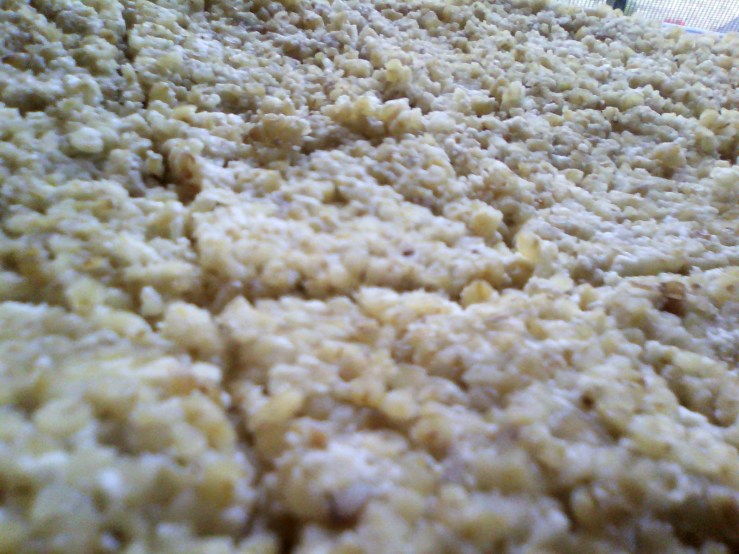 Leave the mixture  to rest overnight and then spread in the form of spoonfuls or  rectangular pieces in the sun to dry. If you will make a large quantity, keep it in a pillowcase or cloth bag.

Xinohondros is made in the summer, when there is enough sun for it to dry out.

Though it  is usually consumed in a dried form, fresh xinohondros has a wonderful taste and can be served for breakfast. Dried xinohondros is found in a myriad of recipes in place of rice. It is  used in soups and stews  or  it is cooked with chicken, or okra, or pork, or  snails, or vegetables, or legumes,  or simply milk.