But yesterday I finally opened a bottle of my own hydromeli.

The drink which was called hydromeli (water- honey) by the Greeks and aquamulsum by the Romans is found in many cultures throughout history, and is also known as mead.
It can be regarded as the oldest alcoholic beverage known to man, and the simplest of course.

Hydromeli preceded the wine in Greece for a long time. The Orphists in one of their favored poetic version of the stories of the Gods, describe the cruelity of Zeus who castrated his father Kronos when he was drunk on honey of wild bees. Of course Kronos could never drunk on honey but he could drunk on hydromeli.

I made the hydromeli using the honey from melomeli (quinces in honey), according to the instructions given by the Greek physician Dioscorides.
Thus, I had to make the melomeli first. 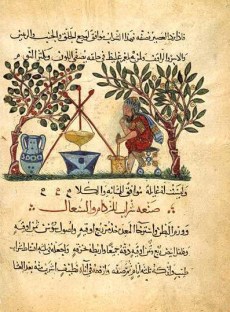 “ And Melomeli, which also is called Cydonomeli (Quince honey) is made as follows. The quinces with their seeds removed, are put into good store of honey, so that they are covered. This becomes good after a year, being like mulsum (honey wine). […] (De materia medica)” 29. 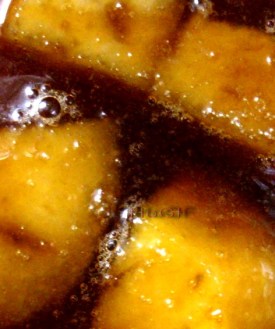 I used thyme honey and 2 quinces, which after almost a year in the jar were softer, but not very soft, and their perfume was absorbed by the honey.

Then, it was time for the hydromeli, which was the simplicity itself.

‘Hydromelon is made as follows: one metretes (apr. 8.6696 gallons) of melomeli of quinces is mixed with 2 metretes (eighteen) of boiled water and sunned in the days under the Dog star (from the beginning of July to the beginning of September). […] (Dioscorides 30)

I mixed 500 gr. quince -honey with 1 kg boiled water and I left the mixture under the sun. After four months I have a very drinkable sparkling hydromeli.

As for the two quinces, I made a honey-sweet jam with them, so autumnal in taste.

Both hydromeli and melomeli are recommended by Dioscorides for treating the stomach ache, dysentery, liver ailments, kidney disorders, and painful frequent urination.

10 thoughts on “NOTHING DIFFICULT ABOUT HYDROMELI. (Except that you have to wait more than a year to taste it.)”